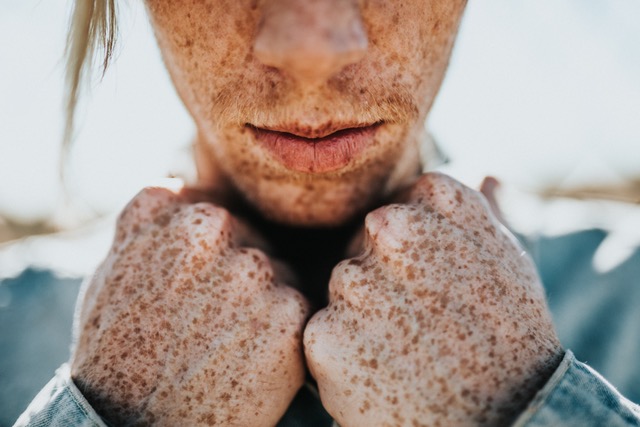 Glutathione and Vitamin C against hyperpigmentation

Skin color and tone is determined by melanin, a pigment made by melanocytes. Melanocytes are cells that are found in the skin and they work by converting amino acid tyrosine into melanin using the enzyme tyrosinase. Melanin is deposited in the upper layer of the skin in form of Pheomelanin (lighter, yellowish pigment) or Eumelanin (darker pigment).

Hyperpigmentation of the skin is caused by an increase in melanin, Skin pigmentary abnormalities are seen as aesthetically unfavorable. Therefore various mechanisms for the hypopigmentary effect of glutathione and vitamin C have been proposed, with inhibition of tyrosinase being the most important.

– Direct inactivation of tyrosinase (the key enzyme of melanogenesis) by binding the copper-containing active site of the enzyme;

– Indirect inactivation of tyrosinase via antioxidant effect wich leads to quenching of free radicals and peroxides;

– Switching production of eumelanin to phaeomelanin;

– Modulation of the depigmenting abilities of other melanocytotoxic agents.

Although glutathione alone can reduce tyrosinase activity, Vitamin C seems to be a good ally for Gluthatione. First of all It inhibits the enzyme tyrosinase which is responsible for converting tyrosine into melanin hence less melanin is produced. Secondly Vitamin C increases the level of Glutathione and vitamin E that help the skin to make the yellowish pheomelanin instead of eumelanin which is darker.

Furthermore Vitamin C is a potent antioxidant that can be used to treat and prevent changes associated with photoageing. It neutralizes free radicals that damage the skin causing aging and dark skin pigmentation and it helps in the regeneration of skin cells and repairs damaged skin. Finally it exfoliates the skin and helps get rid of dead skin cells which are darker exposing the lighter and brighter skin cells below.

Slow Age Concept During the aging process there are different…

Gender Features of the Male Patient

Gender Features of the Male Patient The recent growth, availability…

Exploring the temples The hollow temple is an area often…

This website uses cookies to improve your experience while you navigate through the website. Out of these, the cookies that are categorized as necessary are stored on your browser as they are essential for the working of basic functionalities of the website. We also use third-party cookies that help us analyze and understand how you use this website. These cookies will be stored in your browser only with your consent. You also have the option to opt-out of these cookies. But opting out of some of these cookies may affect your browsing experience.
Necessary Always Enabled
Necessary cookies are absolutely essential for the website to function properly. These cookies ensure basic functionalities and security features of the website, anonymously.
Functional
Functional cookies help to perform certain functionalities like sharing the content of the website on social media platforms, collect feedbacks, and other third-party features.
Others
Other uncategorized cookies are those that are being analyzed and have not been classified into a category as yet.
SAVE & ACCEPT